Estonian is the national language of Estonia, spoken by around 1.1 million people in the country. It is also one of the official languages of the European Union. Estonian is closely related to Finnish and is one of the few languages in Europe that is not Indo-European.

There are two main dialects of Estonian: Northern Estonian and Southern Estonian. The dialects are not mutually intelligible, but they both use the same writing system (based on the Latin alphabet).

When looking for a translation company in Singapore, find one with experience providing certified services. With over 20 years of combined knowledge and expertise under this field, our team at singaporetranslators.com can provide high-quality language translations Singapore to meet your needs.

Need a competent Estonian to Malay translation service in Singapore? Look no further than us! We have a team of highly trained and experienced professionals who are more than capable of handling your translations needs with ease. Plus, our rates are extremely competitive and we offer a 100% satisfaction guarantee, so you can be sure that you're getting the best possible value for your money.

If you're looking for a top-quality Estonian to Tamil translation service, there's no better place to come than us. We're a leading provider of translation services in Singapore, and we're proud to offer an unbeatable service that is both professional and affordable.

When you need a translation, trust the team that has been doing this for years. Our Malay to Estonian specialists are native speakers of both languages and can capture your ideas exactly as they should be said!

For getting your professional document translated into high quality Tamil to Estonian language. We use the latest technology and software for our translation process, which helps us to complete your work quickly and efficiently. Our translators are well-versed in both Tamil and Estonian languages, so they can easily understand the source text and translate it into the target language without any errors.

When you need a professional Chinese to Estonian translation service, look no further than the language experts at singaporetranslators.com. We have a deep understanding of the Chinese language and culture, as well as the Estonian language and culture. This allows us to provide accurate, reliable translations that are true to the original meaning and intent

Need Estonian Translation For Various Fields In Singapore? We Can Help!

The right translation service can make or break your business. We offer top-notch Estonian translation for various fields at affordable prices in Singapore.

We offer high-quality academic translation services for a variety of documents, including but not limited to: essays, papers, thesis, dissertations and presentations. We also cater to other language pairs besides Estonian-English. 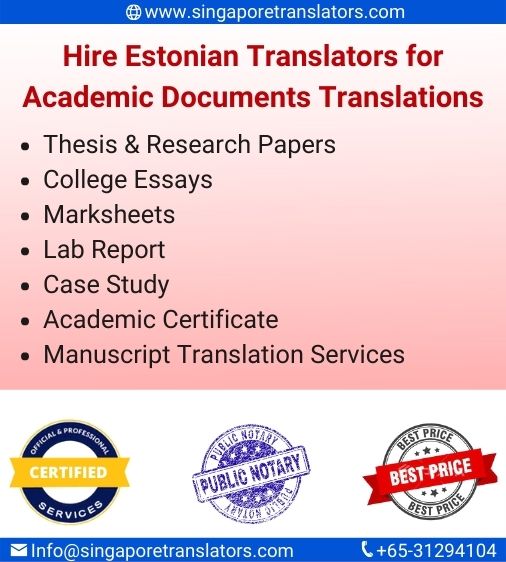 We provide business translation services for a wide range of documents, such as: contracts, agreements, websites, brochures, and more. We have a team of experienced translators who are familiar with the various industry jargon and terminology. 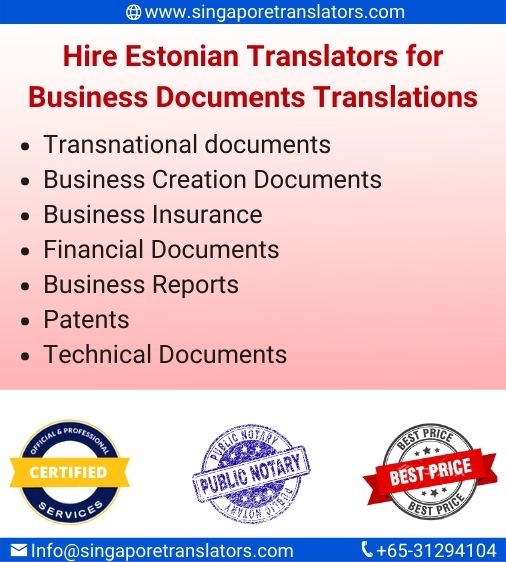 Legally translated documents are a great way to ensure that your business can access all of its legal rights and obligations in any country. We offer our legal translation services for contracts, agreements or other pieces of paper with dense legalese on it - no matter what type you need help translating. 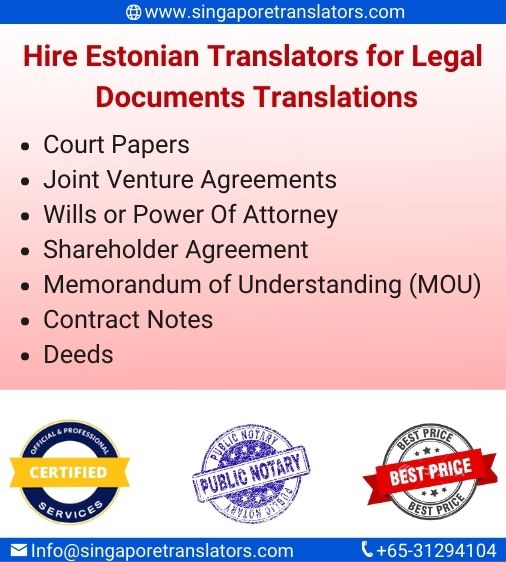 We offer medical translation services for a variety of documents, including but not limited to: medical reports, discharge summaries, prescriptions and more. We have a team of experienced medical translators who are familiar with the various medical jargon and terminology. 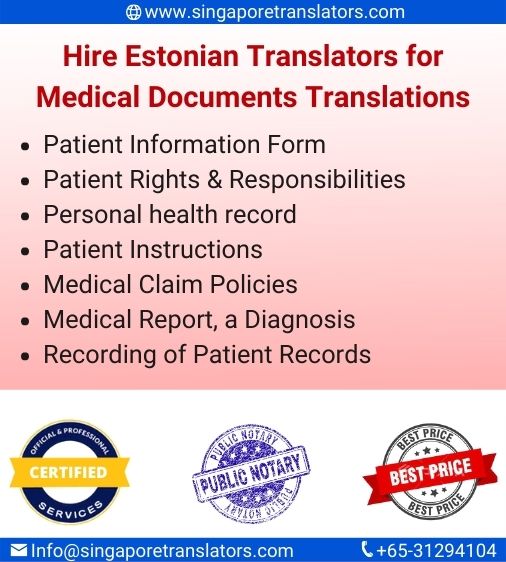 Get Affordable Help With Translation Of Estonian Document In Singapore

If you are looking for an affordable way to translate your Estonian documents, then you should consider hiring a professional translation company in Singapore like us. We offer high-quality document translation services Singaprore at very competitive rates.

We can translate your most important documents such as birth certificates , marriage licenses and death certificates . This will allow you to have them certified in the language that matches where they're from or if it’s not available then English-only translations are offered on all of our translated paperwork for a very affordable price.

If you are doing business in Singapore, we can help you with the translation of your business documents like contracts, agreements, proposals, marketing materials, and website content.

We also offer legal translation services for court orders, police reports, and other official documents. Our team of experienced translators can provide you with accurate and reliable translations that will meet your specific needs.

Our Other Estonian Translation Services In Singapore Includes

We offer a wide range of other Estonian translation services in Singapore. This include:

Our notarisation services are performed by sworn Estonian translators who have been accredited by the Singapore Ministry of Foreign Affairs. This is to ensure that your documents are legally binding in Estonia.

We can help you to legalise your documents from SAL or any of the various authorities in Estonia, including the Ministry of Foreign Affairs, the Police and Border Guard Board, or the Estonian Chamber of Notaries.

We can help you to localise your content into Estonian, whether it is a website, app, or any other type of digital content. We will ensure that the content is culturally appropriate and conforms to the relevant regulations in Estonia.